An update on the new clubhouse from President Pete. 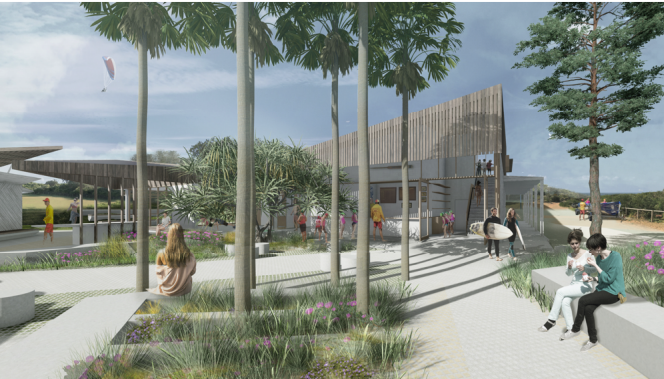 Interiors to build the new clubhouse.

Christmas has come early as after 17 years 1 month and 12 days (the date when Rob Pearson  first approached Council for a new clubhouse ) on Tuesday night Northern Beaches Council selected Grindley Interiors as the preferred Contractor for the construction of our new clubhouse which means that our long awaited new clubhouse has now become  a reality. Although it is likely that demolition and construction will not begin until February 2020 we have passed the last hurdle.

On Tuesday night I addressed the Councillors and impressed upon them the importance of our need for a new clubhouse and the effort which has gone in to get to this stage. I said that in this my 59th season as a volunteer lifesaver at Long Reef… it would be a great to look forward to my 60th anniversary season culminating in the finalisation of this long journey. The Councillors were probably glad that perhaps before the decision was made that if they voted yes they would not have to hear from me again.

We would not have got where we are today without the untiring support of you our members for which I personally thank you.

In particular I must name Rob Pearson, Chris Diggins and Chris Locke for their tireless efforts their time was given on a voluntary basis and if this were not so given the time they have spent I think the club would be in overdraft at the bank. To get where we are today meant a large number of internal meetings as well as a large number of weekly meetings with Council staff and there were some challenges but they were worked through.

This dream would not now be a reality without funding and in this regard we must thank The Hon Brad Hazzard and the Hon Jason Falinski who not only raised the funds but have both also been fully committed to and supportive of us getting this our new clubhouse.

From Council I would be remiss in not thanking the Mayor Michael Regan and Councillors Sue Heins , Rory Amon , Vincent DeLucia and Kylie Ferguson and Council CEO Ray Brownlee and Jorde Frangopolis as well as a number of Council staff.

Special thanks to Chris Diggins all our club members who have tirelessly build The Shed, our temporary clubhouse

I hope you have all seen our new temporary clubhouse (“the Shed”) what a magnificent structure which is to be our home for the next 2 seasons.  Again this would not have been achieved without the tireless efforts of a number of our members and in particular Chris Diggins who has been the driver throughout and pushed the Shed even when Council staff were pushing for us to be housed in a number of containers. I must also mention Stu Munday but to all of you I have not named rest assured you will not be forgotten and your names will see the light of day.

I cannot forget the efforts of Dion and Nooks what a great Nippers team and the way Nippers is run is a smooth and well run operation. I look forward to Nippers starting up early in the new year.

I look forward to catching up with you all over the rest of this season and being able to move into our new clubhouse in my 60th season at the greatest Surf Lifesaving Club in Australia and what a great day to be  a member of this great club.

Finally, I’d like to  wish all of you a very Merry Christmas and a safe and happy New Year. While recent events have put a question mark on how our members on the Northern Beaches, together, the Longy family will get through this together.