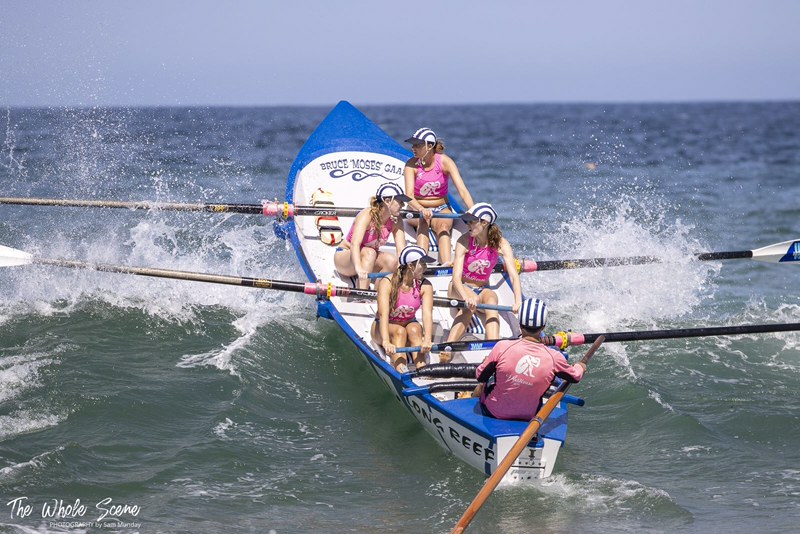 A glorious “non-Newport” sort of a day… The Apples took a solid 2nd place, and the Sharlies finished with a respectable 4th place.

📝 Rob Pearson. 📷 The Sharlies in action by The Whole Scene

An occasional check on the shore break and a lazy little wave if you were lucky enough to find one! We had two crews racing on the weekend. The Long Reef Apples in Open Men’s division finished well at 2nd place in the final, snagged by a South Curly crew. The Sharlies competed in the U19 Ladies division. Asleep in the first race, they woke up in the second race. By the final round, guns were up and the Sharlies finished with a respectable 4th place.

The Apples Race overview – a solid 2nd place in the final, snagged by South Curly.

Race 1 was a bit of a shock to the system…wake up lads – checked on the shore break and a bit scrappy. The Apples Race 2, rowed with much more rhythm and won. Well done lads.

The Semi Final saw start only a “##@@@!!!” starter could deliver – simply impossible for The Apples to jump in as a wave surged under the boat. D in stroke didn’t even make it into the boat and also had his oar popped out of the rowlock by the wave… all over the place … We enjoy these challenges … put in the hard yards and came home well. I wasn’t optimistic but the lads made it through to the final and received an apology from the officials for the colourful start…

Final – checked by a sharp little wave on the start, last to the gate cans… rowed it back to 4th with good rhythm by the turn. Then with true Apples form…they ran a smidgen of a ripple that turned into a runner as we accelerated past almost the whole field and finally turned it into a wave – thought Longy had won but a South Curly crew snagged the chocolates – the rest of the crews a wave behind…

The Sharlies were asleep in Race one. But woke up in Race two and won, with a good start and a bit more energy in their stroke.

Race three was a scrappy affair in the middle of the pack but sufficient to make the final.

The final, GUNS UP….racing!!!! Ok but not great, Sth Curly well in front and a few others edging away… Turned about 4th and the best turn…

Clicked into the right rhythm and found a bit of fire…ran a little swell almost over the top of the Collaroy boat beside us… We were probably very lucky not to catch that wave or it may have been a messy conclusion to the race. Sharlies ruled 4th on the line by the smallest of margins but I reckon it could have gone either way!

A good, fun, and successful days Surf Boat racing. We’re looking forward to a fun season of boat racing! (it’s so good to be back!!)

Last mention, we had two crews out Sunday morning for a glorious row and a few dolphins playing alongside us.

Any questions on competitions? Email co-captains Kenzie & Char at competition.captain@longreef.com