From near drowning to endurance ocean swimming 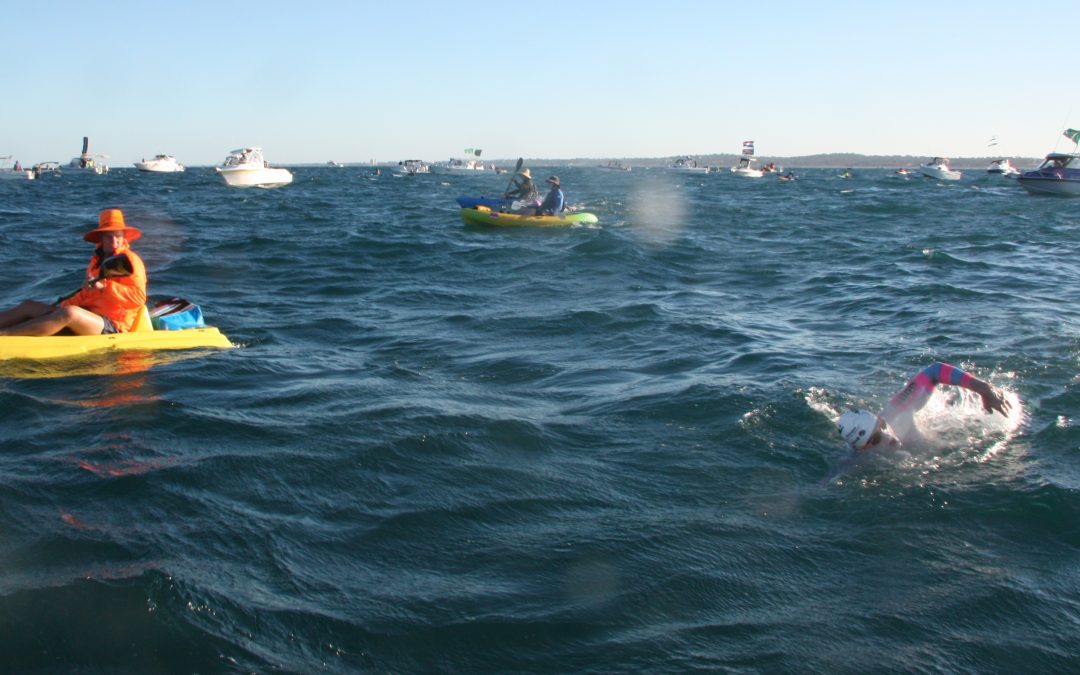 Our club is home to some really interesting characters. One of them is Eric Bateman who is a passionate endurance ocean swimmer. Here is his inspiring story …

“Hi. My name is Eric. I’m 45. For the first 42 years of my life I was a land based mammal. I wasn’t taught how to swim. In fact, I have always thought of myself as a rubbish swimmer. Growing up, I was very uncomfortable in the water. Even so, I joined Long Reef in 1990 and struggled my way through the run/swim/run (aka the shuffle, breast stroke, gasp, shuffle) to achieve a bronze medallion. For me the surf club was about fun, socialising, IRB carnivals and body surfing, all of which could be done basically in 200 or so metre zone between the clubhouse and where the waves started to form just offshore. An interstate move and life took me away from Long Reef (and surf clubs altogether) in the mid-nineties. After years spent in the gym, bush walking, cycling or not exercising at all I took up running in my thirties which culminated in a marathon at age 39. I then trained for and completed a 100km walk through the Blue Mountains with WildEndurance. After those terrestrial ordeals I quit exercise and focussed on being a couch potato. Eventually, my doctor hinted that I wouldn’t be so unhealthy if I took up swimming…at the same time a work mate suggested that we attempt the 1 kilometre Cole Classic ocean swim at Manly. It seemed to be an impossible feat to me at the time, but overweight, aged 42, I fronted at the Warringah Aquatic Centre (awkwardly in my speedos) with a month to go to the big event. That day at the pool I forced myself through one kilometre of breast stroke/freestyle/drowning which took close to an hour. At the 2015 Cole Classic I placed 917 out of 1,380. Fast forward one year, training 3 days a week on my own and I placed 312 out of 1793. At least I was improving. By that time I was entering every ocean race I could get to. I also started swimming twice a week with the wonderful Bold and Beautiful people in Manly.

Fast forward another year and these days the Cole Classic and most other ocean races in Sydney are just too short to keep me interested… These days I swim five days a week with a squad called Vladswim. There I have been introduced to the crazy world of endurance ocean swimmers. In that world a 6km swim is a warmup and 10km a decent but shortish swim. I regularly train with people who have done the Triple Crown (English Channel-33km, Catalina Island Channel-32km, Manhattan Island-46km) and other crazy swims like the North Channel (from Scotland to Ireland, 35km in 10-12 degree water) or Molokai Channel in Hawaii (42km). These days, I regularly swim 8km, 10km, 12km, 14km and 16km training swims in the ocean around Sydney. My biggest swim so far took place shortly after Christmas 2017. A couple of mates and I completed Palm Beach to Shelley Beach, a highly enjoyable 25-26km. I finished feeling great. Two days later I went to the pool and did a hard 10km squad session. I also swam 12km of the 20km Rottnest Channel in Perth in March 2018 before being involuntarily pulled from the water due to a shark sighting, along with about 100 other people. I’ll be heading back to Rottnest in April to attempt the swim again, this time hopefully without the uninvited guest!

In retrospect, my swimming journey really began when I joined Long Reef and started to get confident in the small section of ocean just off the beach. Now I know there is so much more of the ocean to enjoy. Endurance swimming has brought me good health, less stress, and a great group of friends. Most importantly though, it’s been a reminder to not create a personal narrative that limits who I am or what I can achieve. “I’m not a swimmer, I couldn’t do that, I’d drown” are things I told myself for so many years that I firmly believed them. They were not ever true. Compared to my squad mates, who are great swimmers, I am still rubbish…but these days, two and a bit years after taking to the water, I can actually swim alright. Maybe you think that you are not much of a swimmer. I bet with a bit of training you will do just fine. The surf club is a great place to start.”

(photo: Eric, a few kilometres offshore during the Rottnest Channel swim, before the shark …)