Longy in the 60s – Alan Chinner 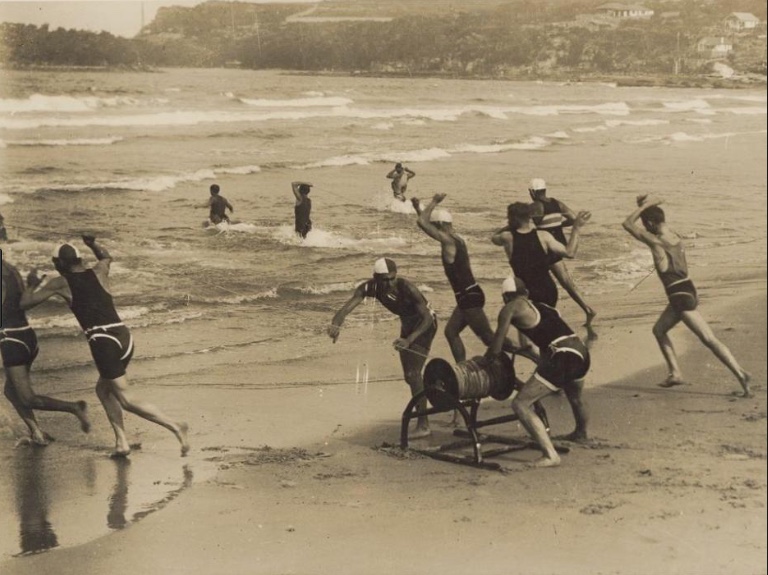 Alan Chinner joined Long Reef and did his Bronze in 1963. Bronze training centred around the reel and belt and mouth to mouth. Cardiac massage was still not on the training horizon. Other rescue equipment included the surf boat.

In the surf boat there was a bow box that housed a shark knife and reel and belt. The rope line was 25 yard in length. Along with dollars and cents and metric measurement, cardiac massage was still not part of Australian way of life. For those of us doing our bronze at that time we had been taught the Holger Nielsen method of resuscitation at school (click here to see a video from the 40’s), not the mouth to mouth method being taught in the 60’s.

So rescue equipment in 1963 was the reel and belt and the surf boat. There were no motorised boats, surf boards or rescue tubes used in rescues. Training centred around the reel and belt and mouth to mouth. Todays march past competition reflects the discipline that was expected to obtain your bronze medallion.

Surf club patrol dress consisted of the red and yellow cap which is still worn on patrol today. We were not provided with patrol shirts or shorts. For sun screen, the preferred sun screen was coconut oil as it provided a best tan.

In 1964 Long Reef agreed to provide patrols at Collaroy for the Aussies held at Collaroy that year. As usual the Aussies had their big surf and being Collaroy a large amount of seaweed. Alan Chinner was designated swimmer and I was the 1st linesman. The patrol team consisted of a swimmer, 1st and 2nd lineman and a reelman. When a surf boat capsized Alan took to the belt and swam out to where the surf boat was. I lost sight of Alan amongst the waves and debris of multiple boats oars and rowers. When hauling the line in I was careful not to drag the line hard as rescuers had been known to be drowned because the beltman and line had been dragged down by seaweed. Eventually the belt came in minus Alan. It was some time before Alan returned to the patrol area. He had released the belt, swum to shore and then spent some time watching the boat races from the Collaroy pool. One could say I was greatly relieved when Alan returned to the patrol area.

The Aussies at Collaroy were a great experience for us young life savers.